Some news about upcoming Onyx devices

-The Canvas 9,7" inch e-ink Carta with Dual Touch and Light

The MAX2 features a flexible E-Ink Carta 13.3 inch display with a resolution of 2220×1650. It has eye-protective display (secondary monitor) mode. This device is not only a note taking reader, but you can also connect it to your PC via an HDMI cable and will will act as a secondary monitor.

The device is equipped with Electromagnetic WACOM and a capacitive layer, which means you can use the accompanied stylus or use your fingers to interact with the screen or flip pages of an e-book.

It features a 1.6 GHZ quad core processor, 2GB of RAM, 32G of internal storage and a giant 4100 mAh battery. It also has a microphone, speaker and 3.5mm headphone jack to listen to audiobooks, music or podcasts. This device is running Android 6.0, so it will support almost every app from Google Play, which is preloaded. The dimensions are 325x237x7.5mm and it weighs just under 550g. 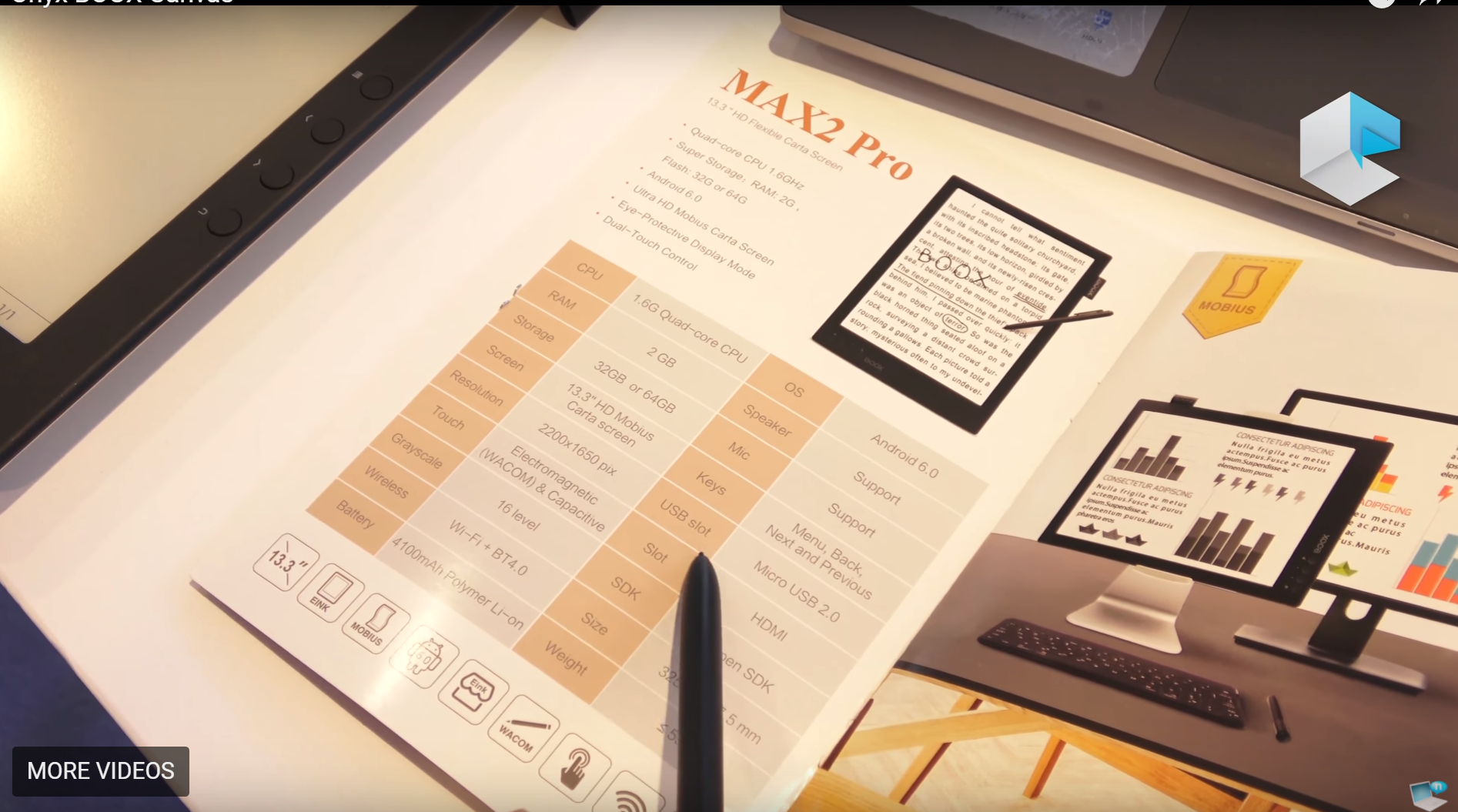 The shown device is still prototype. Some changes in appearance are to expect. E.g I permanently ask them to re-design hardware buttons and re-position of the power button.

The Onyx Boox Note features a 10.3 flat panel e-reader with a flexible E-ink Carta display. It has a resolution of 1872×1404. The panel is also comprised of Electromagnetic WACOM and a capacitive layer, which means you can use the accompanied stylus or use your fingers to interact with the screen or flip pages of an e-book.

Underneath the hood is a 1.6GHZ quad core processor, 1GB of RAM, speaker, mic and USB C. It has a giant 4100 mAH battery and ships with Android 6.0 and has Google Play. This device has got 32GB of internal storag, however the Note does not have an SD card. The dimensions are 249x177x6mm and weighs less than 355g.

The Canvas features a 9.7 E-Ink Carta flat panel display with a resolution of 1200 x 825. It has a WACOM and Capacitive layer, which means you can use a stylus or use your finger to swipe and gesture. Additionaly it has got a front-light so you can read in the dark.

It features a Cortex A9 1GHZ processor, 1GB of RAM, 16GB of internal storage and SD card for an additional 32GB. Like all new Onyx devices It has a USB C connector port. It also has a speaker, mic and 3.5mm headphone jack. It has a 3000 mAh battery. The software is based on Android 4.4 and is extendable thanks Google Play.